This game is early in development. Throughout the production, I will post small updates, and if you like what you see please consider donating something when downloading the available draft versions.

The Setting
The game is based on the book "Nineteen Eighty-Four" (1949) by George Orwell, which is a dystopian illustration of the life of Winston Smith and his life under totalitarian bureaucracy and a world that does not allow for individualism.

“April 4th, 2084.” written in an unstable and unpracticed handwriting on the illegaly aquired notebook paper.

They turned of their newsfeed and went into darkmode on their holo unit. A feeling of utter void and helplessness crept up on them. Since the introduction of the post-libdem calendar it was impossible to be completely certain of the year, assuming that they where 39 years old it seemed reasonable that the year would be 2084. Suddenly a thought struck them, who would ever read this offline confessional? They decided it was for the future, for the unborn.

Their mind focused for a while on the date at the top of the page. The magnitude of their undertaking came into focus and chilled them to the bone. How would they ever be able to communicate with the future? It was of its nature impossible. Either the future would resemble the present, in which case it would not listen to them: or it would be different from it, and their predicament would be meaningless.

It is a game about resistance against a totalitarian world, ushered in by ecological collapse and authoritarian populism. It is also a game about emotional struggles, relationships, love, betrayal, deceit, and the horrible reality of an avoidable future. The player characters are part of a slowly emerging resistance movement, it is meant to be played several times in the same campaign, using several different characters.

Game play
A session gives a narrative experience that can be best described as a social stealth game. A session is not about physical violence, even though it is possible to both receive and cause physical injury. One of the driving forces for both the player on a meta-level and the characters on a fiction level is the process of preserving their history and leaving traces of themselves in the world. Both communication and writing campaign notes are things that are regulated by rules.

Mechanics and systems
The game is in traditional terms GM-less, and the core of the game is an asymmetrical adversarial game, with player characters on one side of the conflict and one player taking the role of "Big Brother" effectively being the antagonist of the game.  The actions of one side enable actions from the other side, according to a rule-based point system. There is no traditional conflict resolution system, where you roll a die to achieve something. Instead, the game is balanced through a system of risk and reward and strategic usage of resources.  This doesn't mean that you will not be rolling dice, there are a lot of situations and rules that use and rely on die rolling.
The game also uses a heavily modified version of the resolution system "Control" published by me in December 2021.

The game is inspired by rogue-likes, Vampire the Masquerade, PbtA, A Thousand Year Old Vampire, and Paranoia among other things.

There is an embryo of a playlist for the game, over the course of production this playlist will continue to grow:

Really looking forward to this.

I hope it will have a solo journaling mode, for that real Winston Smith experience.

There will definitely be a way of playing solo! 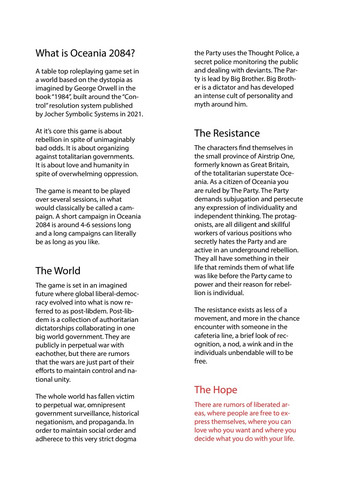 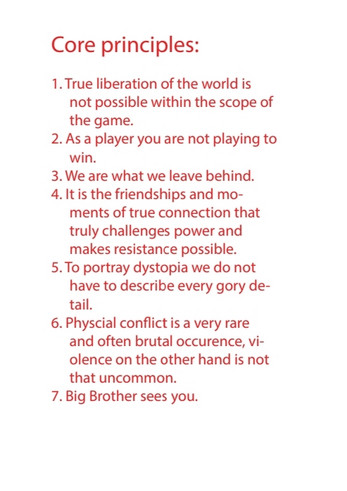 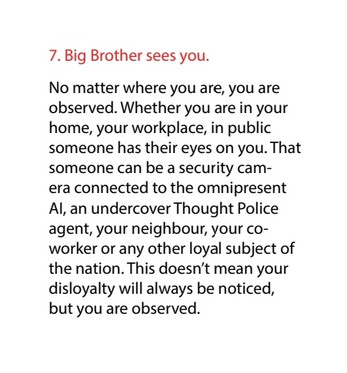